This post originally appeared under the title “The rise of ‘LegalTech’: a German market overview” on June, 24th 2016 as a guest post at tech.eu. The latest version of the LegalTech landscape has its own page.

Everyone in tech has heard about banks getting disrupted by - or more recently trying to partner with - startups in the FinTech space. A somewhat similar, although still much less visible, development is happening in the legal market - another highly regulated industry. Meet LegalTech.

Until very recently “tech” seemed to be something evil and awful that most lawyers wanted to beat with a stick. But very recently, at the 67th Conference of German Lawyers in Berlin, the so-called Anwaltstag, something unexpected happened: it was decided that the conference next year will take place under the motto “LegalTech and Innovation”. This year’s motto wasn’t about tech, but there was a panel discussion with the title “LegalTech versus Lawyers?”.

Looking at the title, especially the word versus and the question mark, this was maybe a little prelude for next year. There was heated discussion and some skepticism. Among others, lawyers were wondering if LegalTech might lower quality compared to tailor-made legal advice, how clients would still build trust in their lawyers if the personal interaction between them is partly replaced with tech, if tech-driven legal advice will negatively affect their compensations, and if the brand-building and valuable client relationships might shift from law firms to LegalTech companies.

But there also seemed to be genuine excitement from a few lawyers. If you look at how tech is currently used in many small and medium-sized law firms, that already is progress. Many firms still do not have computers on the desks of their professionals, case files are not digitized, and lawyers carry huge stacks of paper to court, rocking their fax machines like back in the Nineties, and instead of typing their legal prose into a text processor themselves -or at least using speech recognition-, they record audio cassettes and have staff to type it out - something that virtually every other industry has gotten rid of.

More often than not, these drafts are circled around for a few rounds if there are corrections - which are often also recorded onto an audio cassette and then typed again. If the lawyer is lucky then at some point there is a version that they sign and that can be sent with one of those fancy fax machines or via snail mail. Naturally nothing just magically happens in a law firm - if lawyers are finally happy with a draft and want to sign and send it, they have to decree what should happen next, which is a fancy way to say “Add a piece of paper for their assistants” which says “print the final version and two copies, bring them back to me for signature, put them into an envelope and mail them to the court, then put the whole file into a folder and put it back onto my desk for review in 4 weeks”. If this sounds ineffective and like a lot of wasted time to you, that’s because it is.

So what is LegalTech and why does it matter?

Legal Technology, also known as LegalTech, refers to technology and software that makes lawyers more efficient. But LegalTech does not stop there. Traditional law firms are confronted with an ever-growing number of startups working on specialized legal products, that are directly competing with law firms.

Just like traditional banks are under attack by FinTech startups that are unbundling banking, the same development is happening in the legal industry. LegalTech is still in its infancy and will evolve. It will also without doubt change the legal market forever. This is my attempt to categorize the current German LegalTech landscape: 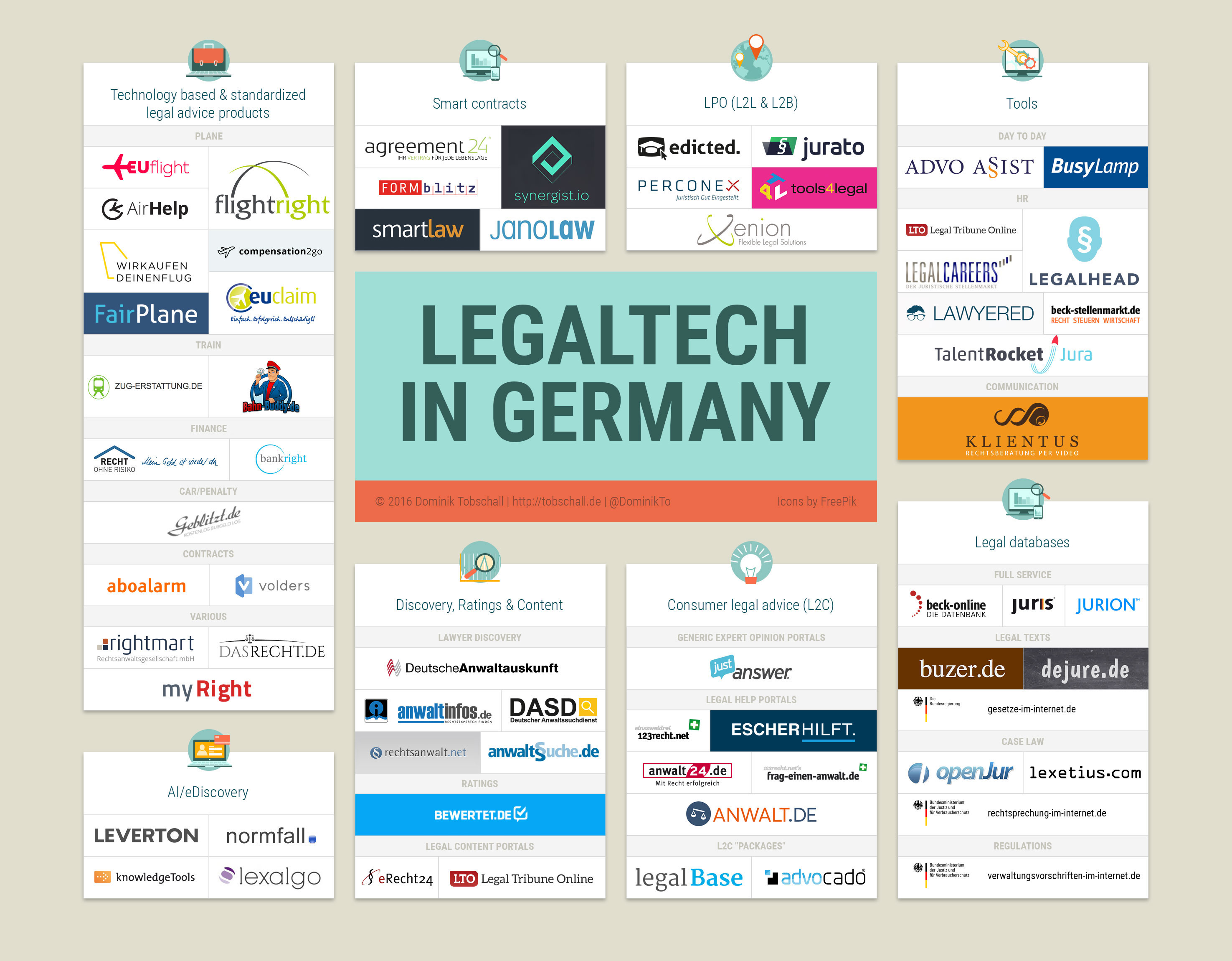 The latest version of the LegalTech landscape has its own page.

A core motive is automating things that can be automated. So at the core of LegalTech are attempts to provide technology-based and standardized legal advice products for well-understood problems occurring in great volume. Instead of lawyers providing expensive hand-crafted legal advice, clients almost exclusively interact with software, handling the case intake, managing the whole process, keeping the client informed and generating the necessary documents. If anything, lawyers take care of handling exceptions and signing documents.

Tech companies offering such services, but also businesses in general with regular need for legal advice, will have need for LaaS (Lawyers-as-a-Service). Such legal process outsourcing, or LPO for short, is offered both in Lawyer-to-Lawyer (L2L) as well as Lawyer-to-Business (L2B) flavors and sometimes less (perconex.de, tools4legal.com, xenionlaw.com) and sometimes more technology driven (edicted.de, jurato.de). As companies keep pushing at optimizing their internal processes, LPO will most probably get more and more technology-driven. We’ll also see an “API-fication” of these services, which will enable to directly integrate them into other applications and automate processes that require legal advice.

Another exciting category is AI and eDiscovery. Companies in this space are trying to reduce the workload for lawyers when working with massive amounts of data and documents. Examples are products that automatically analyze contracts to allow risk assessments without having lawyers read through thousands of pages (leverton.de) and products that help lawyers to structure documents and create links between them (lexalgo.com, knowledgetools.de, normfall.de). Larger law firms are also conducting their own experiments in this category (e.g IBM Watson at Baker & McKenzie).

Gone are the days when law firms only worked cases in their geographic vicinity; that is where platforms come in that allow lawyers to find other lawyers to send to their court appointments (advoassist.de). With higher workloads and more competition, optimizing processes inside a law firm is also critically important, e.g. with easy billing and reporting software (busylamp.de) or effective hiring of legal talent (lawyered.me, legalhead.de, talentrocket.de). Most communication with clients still happens face to face, via phone, fax or email – so WebRTC-based video chat including features to exchange documents via the browser is a somewhat fresh approach (klientus.de). An applicable label for this category is maybe tools, because products in this category are used by lawyers and inside law firms.

Somewhat tangential is legal practice management (LPM) software. LPM solutions are the central hub of a law firm where case management, client management, billing, reporting, assigning tasks to staff, and potentially in the future also integration of other legal technology will happen. Current legal practice management solutions are still somewhat dated desktop applications – at least in Germany the shift to cloud-based solutions has yet to come. LPM solutions are also primarily used by staff today, but as these tools get more powerful and deal more with actual casework, future lawyers will start interacting much more with these applications themselves.

Still the most important tool for lawyers today though and among the first to go digital is the legal content itself. Legal databases offer the various legal texts (buzer.de, dejure.org, gesetze-im-internet.de), regulations (verwaltungsvorschriften-im-internet.de), case law (openjur.de, lexetius.de, rechtsprechung-im-internet.de), as well as a combination of those including legal handbooks and secondary literature (beck-online.de, juris.de, jurion.de). The shift towards open data is also in full swing in the legal industry, so more and more of this content will be freely available in the future, lowering the barriers to building services and applications around this content, but also affecting revenue streams of the established providers.

Sometimes all that is needed is a good contract. Companies in the smart contracts category are trying to cover this with varying levels of smartness (agreement24.de, formblitz.de, janolaw.de, smartlaw.de, synergist.io). For well-defined problems, smart contracts are a promising alternative, but as with technology-based and standardized legal advice products in the foreseeable future lawyers will still have plenty of work whenever things are a little more complex.

And lastly there are discovery and rating portals to help consumers to find lawyers with certain specializations (anwaltsauskunft.de, anwaltinfos.de, anwaltsuche.de, dasd.de, rechtsanwalt.net) or rate professionals (bewertet.de), including lawyers that they have worked with and legal content portals both aimed at consumers (e-recht24.de) and people with a legal background (lto.de).

There are exciting times ahead, both for lawyers and tech folks diving into LegalTech. I for one am looking forward to our lawyer-automation overlords. ;-)

Did I miss any german LegalTech companies? Disagree with the categorization? Should there be additional categories? I’d <3 to hear from you.